Last week the HR Law Insider warned businesses about the risk of large damage awards arising from the illegal enforcement of medical leave policies.  Just yesterday, a large Tucson trucking company experienced that risk in real time — agreeing to pay $300,000 and furnish other relief to settle a disability discrimination lawsuit filed by EEOC.

According to EEOC, trucking company CTI denied requests for unpaid leave beyond 12 weeks and transfers into open positions for which disabled employees were qualified.

For example, the EEOC charged that CTI discriminated against Elizabeth Barr because of her disability. CTI employed Barr as a payroll and billing clerk from November 2002 until August 2010. Barr suffered from a rare eye disease that substantially limited her eyesight, and she needed multiple surgeries to correct her eyesight. Barr took leave under the Family Medical Leave Act (FMLA). Prior to the expiration of her FMLA leave, CTI wrote her a letter informing her that if her doctor did not release her to “full, unrestricted duty” by the time her FMLA leave expired, her employment and benefits might be terminated. Barr asked CTI for additional time to recover, but CTI denied her re­quests, refused to explore possible accommoda­tions, and terminated her on the day her FMLA leave expired.

In addition to the settlement requiring CTI to pay $300,000 to several disabled employees, CTI also must take the following actions:

“Employers should know they violate the law when they have blanket policies requiring disabled employees not to return to work until they are 100% healed,” said EEOC Phoenix Regional Attorney Mary Jo O’Neill. “Such employers violate the ADA because they fail to conduct individual­ized assessments to explore reasonable accommodations that may allow disabled employees to return to work. Employers also violate the ADA when they have inflexible, rigid policies limiting unpaid leave to 12 weeks. Again, employers have an obligation beyond the FMLA to provide unpaid leave as a reasonable accommodation unless to do so would result in an undue hardship to the employer.”

EEOC District Director Rayford O. Irvin added, “Employers must grant employees with disabilities reasonable accommodations including leaves of absence, time off, light duty and reassignment -absent undue hardship. And they also must conduct fact-specific individualized evaluations when deciding a proposed accommodation is indeed an undue hardship rather than simply relying on assumptions or beliefs.”

Employers often implement and enforce medical leave policies in a rigid manner that does not comply with the Americans with Disabilities Act (ADA).  Such practices expose employers to claims of discrimination and to substantial damage awards.

This HR Law Insider article presents a recent example of an employer that tried to enforce a medical leave policy only to learn — the hard way — that it was violating federal law.

On Monday, the EEOC announced that  healthcare provider Dialysis Clinic, Inc. agreed to pay $190,000 to a former employee with breast cancer and furnish other relief to settle a federal disability discrimination lawsuit filed by the EEOC.  It was alleged that the dialysis clinic violated the ADA law by firing and then refusing to rehire a long-time nurse who needed more medical leave to complete her treatment for breast cancer.

DIALYSIS CLINIC MAKES A CLASSIC MISTAKE AND PAYS FOR IT

Francisca Lee had worked as a nurse at the Dialysis Clinic’s Sacramento Southgate location for 14 years when she took medical leave for mastectomy surgery and chemotherapy treatments.  After four months, Dialysis Clinic notified Lee by mail that she was being terminated for exceeding the time limit dictated by its medical leave policy, the EEOC said.  This was done despite Lee being on approved medical leave and cleared by her doctor to return to work without restrictions in less than two months.  Lee was told that she would have to reapply for open positions. However, when Lee did apply two months later, she was rejected, and, not long after, Dialysis Clinic hired a newly licensed nurse.

After an investigation by EEOC investigator Monica Colunga and after attempting to resolve the case through pre-litigation conciliation efforts, EEOC sued Dialysis Clinic.

EEOC San Francisco Acting Regional Attorney Jonathan Peck said, “Ms. Lee was a long-term employee who only needed two more months to recover and return to work.  Extending her medical leave would have posed little burden on Dialysis Clinic. Employers with inflexible leave policies lose the opportunity to help a valued employee return to work – and they’re violating the law.”

According to the consent decree settling the suit, Dialysis Clinic agreed to pay $190,000 in damages; revise its policies concerning reasonable accommodation; provide anti-discrimination training to human resources personnel; and post notices regarding the lawsuit. In addition, the employer will periodically report to the EEOC on its handling of extended medical leave requests.

“As a nurse, you understand that sometimes the healing process takes time,” said Lee. “I am pleased to know that Dialysis Clinic will now take steps to ensure that employees can take the time they need for medical reasons without having to worry about losing their jobs.”

Any time an employer is confronted with an employee that may need medical leave or some other accommodation to help with a serious medical condition, it should evaluate and determine whether it is complying with the ADA (and, for companies 50 employees or more, the Family Medical Leave Act).

The process of deciding on whether a reasonable accommodation is possible and practical is oftentimes difficult.  There is often great friction between the employee’s medical needs and the employer’s legitimate business needs.

If a requested accommodation poses an “undue burden” on the employer –if it is not objectively reasonable because it will pose too great a burden on the business — the employer is not required to provide that accommodation.  Any time an employer refuses an accommodation on the basis that it would create an undue burden, it should know that its decision may be scrutinized by the EEOC and, ultimately, by a jury.

In sum, when making a decision as to whether to accommodate a sick employee, (1) know that the ADA requires an accommodation unless it would impose an undue burden; (2) maintain openness and flexibility in enforcing leave and other policies; and (3) consult with counsel to ensure that you are making a decision that, if tested, is fully supportable.

PS  October is breast cancer awareness month.  Hopefully, through our collective efforts, this terrible disease will soon be eradicated.

The Pregnancy Discrimination Act (PDA) states that “employers must treat women affected by pregnancy . . . the same for all employment-related purposes . . . as other persons not so affected but similar in their ability or in-ability to work.”

What does this mean in the real world?  UPS recently found out when it was sued for sidelining a pregnant employee who could not lift the 70 pounds UPS requires of its drivers.  The US Supreme Court’s Young v. UPS decision now gives businesses around the country clear guidance as to how the PDA will apply to them. 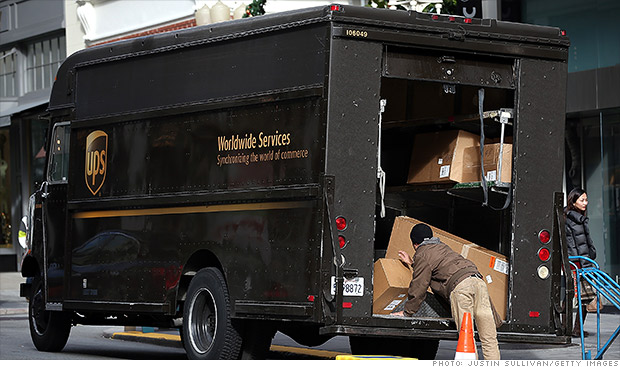 YOUNG V. UPS:  US SUPREME COURT TO DELIVER BAD NEWS TO UPS
Peggy Young was a part-time driver for UPS. When she became pregnant, her doctor advised her that she should not lift more than 20 pounds. UPS, however, required drivers like Young to be able to lift up to 70 pounds. UPS told Young that she could not work while

under a lifting restriction.

Young sued UPS, claiming that it acted unlawfully in refusing to accommodate her pregnancy-related lifting restriction. Young presented several favorable facts that she believed she could prove. She pointed to UPS policies that accommodated workers who were injured on the job, had disabilities covered by the Americans with Disabilities Act of 1990 (ADA), or had lost Department of Transportation (DOT) certifications. Pursuant to these policies, Young contended, UPS had accommodated several individuals whose disabilities created work restrictions similar to hers. She argued that these policies showed that UPS discriminated against its pregnant employees because it had a light-duty-for-injury policy for numerous “other persons,” but not for pregnant workers.

UPS responded that, since Young did not fall within the on-the-job injury, ADA, or DOT categories, it had not discriminated against Young on the basis of pregnancy, but had treated her just as it treated all “other” relevant “persons.”

Two lower courts ruled in favor of UPS, but the US Supreme Court reversed and remanded the case for trial:  “The record here shows that Young created a genuine dispute as to whether UPS provided more favorable treatment to at least some employees whose situation cannot reasonably be distinguished from hers.” The court noted that:

HOW EMPLOYERS SHOULD PROCEED IN LIGHT OF YOUNG V. UPS

The same analysis applies when deciding whether to discipline or terminate a pregnant employee.  Disciplining or terminating a pregnant employee often draws the highest level of scrutiny, particularly when the employee has no prior record of discipline.  Indeed, one out of every five Title VII lawsuits involves allegations of pregnancy discrimination.

Pregnancy discrimination case involve a variety of fact patterns, including:

The judge’s decision provides employers with key takeaways when dealing with employee misconduct.  Before discussing those takeaways, here is the full decision. THE JUDGE’S DECISION IN A NUTSHELL

The judge’s decision is lengthy, but can be boiled down to the following rulings:

Judge Berman’s decision further admonishes the NFL for its failure to provide Brady with the ability to confront witnesses during the hearing and obtain documents in discovery:

In sum, the NFL’s two fatal errors were (1) failing to warn players that deflating footballs or similar conduct could result in a suspension and (2) unfairly denying Brady the right to obtain investigatory documents and to confront a witness to the investigation which led to his suspension.

Here are four takeaways for employers from the judge’s decision:

First, employers should have extremely broad language in employee handbooks that encompass a wide range of misconduct that can lead to discipline up to and including discharge.  While “deflating footballs” is not likely to be included as a dischargeable offense in your company’s employee handbook, management should annually review the handbook to ensure it is appropriately broad and complies with the law (some handbooks go too far and state policies which, if followed, are illegal).

Second, if you elect to engage in arbitration to resolve disputes — I am generally not a fan of arbitration — then the arbitration process must be fair to all parties. Judges rarely overturn arbitration decisions, but when they do,  procedural unfairness is a common basis for the decision.

Third, I believe the judge could have found for the NFL as easily as he found against it.  I am not suggesting Judge Berman was improperly biased.  However, aspects of his ruling are troubling, including the notion that a player should not know he may be suspended for (a) engaging in a conspiracy to cheat and then (b) covering up that conspiracy by refusing to cooperate with an investigation.

The lesson:  any time a company or organization — in this case one of the largest and most profitable organizations on earth — places its fate in the hands of a judge or other third party, control is lost; and the resulting decision often depends more on who is deciding the case than the actual facts of the case (e.g. the OJ Simpson case).

Fourth, choose your legal counsel wisely.  It is reported that the NFL paid “neutral” investigator Ted Wells over a million dollars for a report which had more holes in it than Swiss cheese. The NFL, presumably advised by other high paid lawyers, made a number of other tactical mistakes.

If you cannot avoid a dispute, select legal counsel based on proven experience AND a targeted and thoughtful interview and selection process that is not affected by the size of your lawyer’s cufflinks, firm letterhead, or ego.

The Super Bowl champion Patriots are back in business: the NFL season starts next week and quarterback Tom Brady is back at the controls.